You are here: Home > In Context > Narcopaths in Communities > Narcissistic Politicians

There is one vital thing to understand about politicians of any country or persuasion – and that is Narcissistic Personality Disorder. People with this disorder number 6.2% of the general population (Stinson et al, USA, 2008) and are drawn to positions of power and prestige – politics being a favourite. 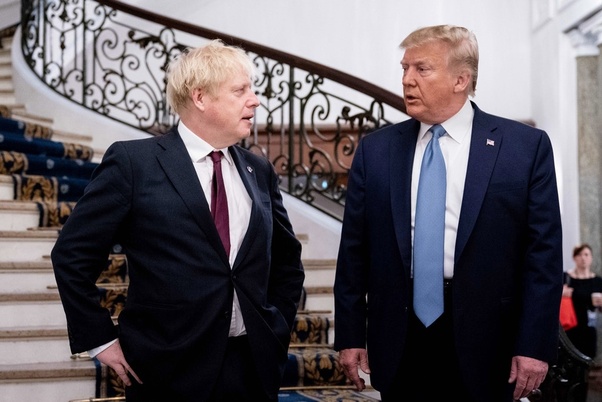 (Photo credit and excellent article about these two at U.K. Revolt Against Boris Johnson Exposes Republicans’ Complicity With Trump)

People with this disorder all show consistent traits:

Narcissists have two personas – their “false self” – a charming and charismatic façade designed to garner support and admiration, and a “real” or “authentic” self that is highly toxic – wracked with deep self-loathing and chronically low self-esteem, motivated by a completely different set of drivers and emotions that normal people. They are the classic Jekyll & Hyde split personalities written about by Robert Louis Stevenson.

Given that their entire public personality is a lie, so they are pathological liars in every walk of life – and will lie about anything as required to reinforce their fake persona, to garner support and to hide the monster that lies beneath the mask. It is for this reason that they will lie on the campaign trail, making all kinds of promises that they feel an electorate will like and buy, anything to get them a vote and into power. They feel little if any self-generated obligation to fulfil these promises once in office, however.

Although this may sound unbelievable, narcissists are incapable of feeling certain emotions including empathy, compassion and love. Brain scans indicate that the part of the brain responsible for feeling these emotions, the amygdala, simply has not developed properly. To compensate for this, narcissists carefully study neurotypical people and the way they display such emotions, and then mimic them as best they when appropriate. Doing so convincingly is a key part of the charade. So whilst many people may care about a range of issues – global warming, ecological collapse, law & order, healthcare, education etc – the sad reality is that narcissists have no genuine feelings about these issues at all, hence the hollow promises and inaction.

Narcissists feel they deserve preferential treatment from others, from the system and from life in general. It is for this reason that they fiddle their expenses as much as they do, they are so predisposed to bribery and corruption, and feel that they above the law.

We erroneously believe that politicians act in the best interests of society and the constituencies they represent. In reality a narcissist will act entirely in their own self interest, saying anything and doing anything to get themselves ahead. They have a distinct lack of moral compass when it comes to anything outside their own benefit.

Normal people usually have genuine and profound views. Narcissists do not, tailoring instead their apparent opinions to their current audience, saying anything that they think will win them greater popularity, influence, power, wealth etc in the moment. Their views will therefore vary from day to day, depending on who it is they are talking with (or at).

Whilst crippled by lack of self-esteem, narcissists desperately what is termed narcissistic supply, or fuel, to feed their weak sense of self. For many of them their apparent attractiveness to the opposite sex is a key indicator and boost to their fragile ego. As a result they are constantly on the hunt for new conquests. Their inability to feel any love, empathy or compassion, not to mention guilt or remorse, leaves with with little or no emotional bond to their current long-term partner – if they have any.

Pathological narcissists are Machiavellian to the core, regardless of how effective their “false self” is in persuading others to the contrary. They will manipulate facts, people and ideas to meet their objectives without a care in the world for any adverse impact that this might result in. Indeed, they harbour intense jealousy towards anyone who enjoys normality, joy or abundance (because they will never have these attributes), and derive sadistic enjoyment in causing other people pain.

A narcissist is desperate to be significant, important and influential. In business and in their private lives, their ways result in chaos in the present and a trail of destruction in their wake stretching throughout their past. They are unable to hold themselves accountable however, dodging any kind of responsibility or blame. They will never apologise for the pain and anguish they cause but instead deflect it with a range of techniques.

It is ridiculous that most people applying for any kind of job need to submit to psychometric tests, and yet the most powerful people in the country and not subjected to personality profiling before they are able to run for office. Sadly pathological narcissism is so endemic in politics throughout the world that we are rapidly moving into the point of no-return. It is easy to see how the vast majority of countries and federations have political systems that are so broken and corrupt that they are not fit for purpose. It is why humanity now faces so many existential threats, and with such little political willpower to resolve the problems.

Exceptions to the Rules

Once in a while it is possible to encounter politicians who break the rules and exhibit normal range emotions. These are the ones driven by the greater good, and end up proposing sensible policies – some of which can appear radical. Jacinda Arden of New Zealand is an example. British MP Jo Cox was another, sadly taken too early.